If you’re someone who is constantly struggling with achieving your goals (and who isn’t?), do you know what’s standing in your way? Do you think your goals have become just too hard to accomplish? Maybe you feel you must not “want it” bad enough to commit to massive action?

It’s probably not any of those reasons. In fact, I’d argue that the greatest problem that’s been preventing you from accomplishing your biggest goals is that you’re not thinking SMALL enough. 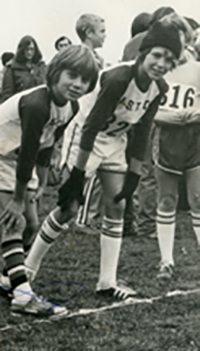 One summer, many years ago, I decided that I wanted to become an athlete. In school, it appeared, that athletes had girlfriends. And, it was obvious, I did not. I was too inexperienced and uncoordinated to excel at the popular team sports, so I decided I’d run on the varsity cross country team that fall. I admit, cross country isn’t considered a glamour sport, but it would position me as an athlete, and therefore, girlfriend eligible.

Problem was, I’d never run (on purpose) a day in my life. That didn’t dissuade me, however. I just needed to become a varsity-level runner—over the two or three months.

So, there it was: my BHAG—my Big Harry Audacious Goal: Run on the varsity cross country team in the fall. Most standard high school cross country races were just over three miles, so I simply needed to start running three miles, at race speed, every day.

I was determined to believe it’s possible and take massive action. I merely needed to want it, proclaim it, and believe it. Right?

It dawned on me that running three miles at a race pace needed to start with getting around the block just once. Then twice… then three times… and so on. Thinking and working small would add up to bigger things.

The magic of small, compound interest

But that’s not the best part. The best part was when my folks would take me to the bank to have the savings interest entered in the book. Over the years, I started to take pride in how my meager savings were growing due to austere savings and compound interest.

Maybe you’ve seen how compound interest adds up. For example, let’s say you have the choice between having $5 million in cash today, or a single penny today—that happens to double in value every day for a month. Which would you choose?

Even if you’ve heard this before and know that the penny gambit is the one to choose—because it leads to greater wealth—it’s still hard to believe that it will result in more money in the end. Because it takes so much longer to see the payoff.

A week after receiving your first penny you’ve barely made it past a single dollar, almost two weeks later you’re still way south of 200 dollars. It’s not until the very last day that you start seeing how it all eventually adds up.

The same way that money multiplies through compound interest, the results of small, consistent, daily efforts multiply as you repeat them. On any given day it may feel that it makes little difference—yet the impact they deliver over the months and years can be enormous. We often dismiss small efforts because they don’t seem to matter very much in the moment.

Unfortunately, the slow pace of transformation also makes it easy to let your efforts slide.

But the truth is, if you improve by just 1% each day for one year, you’ll end up 37 times better by the time you’re done. Success is the product of small daily effort—not once-in-a-lifetime transformations.

What really matters is whether you’re on the path toward success. You should be far more concerned with your current trajectory than with your current results. Direction is more important than speed and distance.

Speaking of speed and distance, I did run as the last man on the varsity team that fall. In fact, decades later, I’m still running several miles a day and enjoy (and even take a little pride) in how smaller efforts have added up to positive transformations.

Small efforts are the ones that will define your future self and help you accomplish your goals—even Big Hairy Audacious Goals.